Father Markus Kane is a Catholic priest and older brother to Lucas Kane in Fahrenheit: Indigo Prophecy. Markus and Lucas were close as children but drifted apart after their parents' death and Markus' decision to become a priest. It isn't until Lucas' murder of John Winston at a local diner does Markus become more involved in his brother's life. The ordeal causes Markus to struggle with his religious beliefs, to choose between his faith or his brother, and in fear of the police possibly killing him, Markus willingly hides and aids his brother as Lucas delves deeper into the conspiracy surrounding the murder.

Markus was raised on the Wishita Military Base with his younger brother, Lucas Kane, where the two lived with their scientist parents, John and Mary Kane, as they studied a newly discovered Artifact. Although socializing with Lucas was difficult, the two brothers were close. It isn't until the death of their parents do the brothers drift apart with Markus' decision to become a priest of Saint Paul's Church, something which Lucas perceived as abandonment.

The day after the murder of John Winston at Doc's Diner, an oblivious Markus contacts Lucas for plans to visit their parents' grave on the anniversary of their deaths, although admittedly, it's simply an excuse so the two can spend more time together. It's here on this phone call that Lucas requests an emergency meeting to a nearby park and where he confesses his crime and the strange circumstances of it. Lucas says he had a vision of a hooded man who controlled and forced him to commit the murder, carve a symbol on his forearms and caused him to forget parts of the night before the murder. Markus is visibly shocked and skeptical but level-headed and will, by the end of their conversation, suggest Lucas turn himself in to the police or a mental hospital. Lucas will then either part ways bitter or grateful at what little help Markus does offer, a crucifix.

Their second meeting occurs the next day at their planned visit to the local cemetery. Lucas had brought along some red flowers to lay at their parents' grave and, while standing to pay their respects, recalls a childhood memory of when Markus and some other kids at the Wishita Military Base unknowingly played in a hanger about to explode. The fate of other children is dependent on the player's actions. Markus eventually interrupts his thoughts to give the address of a psychic to Lucas, a woman named Agatha, with the comment he doesn't believe in any of it but sincerely hopes she can help him.

That night, with some trouble, Markus finds Lucas' apartment to see how the meeting with Agatha went, but upon ringing the doorbell, no one answers, and he looks dejected. Inside, Lucas had been attacked in a vision where his apartment was a storm and everything inside was trying to kill him and the entire building seemingly collapsed. Lucas succeeds in avoiding certain death by running to the balcony in time to return to the real world and hold onto a ledge. His startled cries alerts Markus in the hallway and, immediately assuming danger, he breaks down the door, finds Lucas and pulls him up to safety. While Lucas is clearly traumatized by the experience and claiming somebody tried to kill him, Markus is initially angered and thinks Lucas tried to kill himself and simply making up excuses. But Lucas is on the verge of breaking down and so Markus softens his voice and lays a comforting hand on his shoulder, reassuring Lucas that everything will be fine, and he'll help him, and the two hug. Markus cares for Lucas the rest of the night onto the next day, refusing Lucas to go to work, but after having slept through most of the day and feeling out of touch with reality, Lucas eventually convinces his brother to let him go.

At Lucas' job, the Naser & Jones Bank, detectives Carla Valenti or Tyler Miles arrive to ask questions after finding a bank note at the scene of John Winston's murder, convinced the killer is an employee at this building. They find incriminating evidence pointing to Lucas as the culprit and later raid his home but Lucas manages to escape and runaway using his maturing supernatural powers. He walks all night to the Saint Paul's Church and falls asleep on the pews until Markus finds and awakens him, once again having been attacked in a vision and saved by his brother. Markus warns his brother the police may visit the church, question him and possibly put him under surveillance. Although Markus is in denial of the things his brother tells him and feels a religious confliction, he ultimately loves and cares for his brother, expressing the fear the police will kill him if they find the chance, and allows Lucas to leave the church and go into hiding. As his brother walks away, Markus thinks of how he's protecting an insane murderer but how he can't betray him, and prays to God for help.

Once Lucas had gone into hiding with a new disguise, Lucas receives a vision while sleeping at a sleazy hotel, of his brother's possible death at the hands of the Oracle of the Orange Clan and urgently calls the church to warn him. Just as the Oracle greets Markus, the phone rings, and the fate of Markus is left to the player. If Markus ignores the call or later doesn't lock the door fast enough, he will die, and it will leave a great negative impact on Lucas' mental health. If Markus answers the call and follows Lucas's instruction to lock the doors in time, he will be told to call the police and not to go outside until they arrive. Markus will survive for the two to meet again. Lucas will hang up on his confused and unbeknownst brother for a positive effect on his mental health.

Sometime after Lucas' death at The Fun Fair while rescuing his ex-girlfriend in captivity, the world's temperature continues to fall to the point of a city-wide emergency with some leaving to go further south while the Orange Clan's influence becomes more apparent with their soldiers appearing in the city and following their orders. At some point, The Invisibles came in contact with Markus, brought him to their underground base and explained everything to him, erasing all doubt from his mind of Lucas' sanity and innocence, realizing he had been telling the truth this whole time. Lucas is resurrected from the dead by the A. I to do their will and find the Indigo Child, but Lucas defies them and is later led by the Invisibles to their base where the brothers reunite. They hug and Markus hopes Lucas will forgive him for ever doubting him. 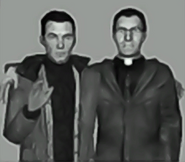 Photo Lucas keeps at his job. 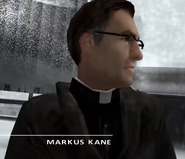 Add a photo to this gallery
Retrieved from "https://fahrenheit.fandom.com/wiki/Markus_Kane?oldid=5924"
Community content is available under CC-BY-SA unless otherwise noted.