Edit
watch 01:36
We're Getting Mutants in the MCU - The Loop
Do you like this video?
Play Sound

The Murder is the first chapter in Fahrenheit: Indigo Prophecy. It's the pivot that starts the daring and intricate series of events that will involve Lucas Kane, Carla Valenti and Tyler Miles.

Lucas Kane is in Doc's Diner bathroom stall, carving marks on his forearms.

Unknowingly and unwillingly, he murders a man, John Winston, who was washing himself. Lucas then snaps out of the trance; horrified, he leaves Doc's Diner before a police officer, Martin McCarthy, taking a break in the restaurant, will inevitably find the corpse. 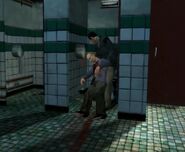