Tiffany Harper is a character of Fahrenheit: Indigo Prophecy, and ex-girlfriend of Lucas Kane.

Role in the plotEdit

Lucas and Tiffany had been dating for two years and lived together in Lucas' apartment and broke up a month before the story began. She works as a nurse and found her own apartment and is renovating it.

The day after Lucas murdered John Winston in the Doc's Diner restroom, Tiffany will call Lucas at work about her plans to pick up the rest of her stuff at Lucas' apartment.

That night, Tiffany arrives and rings the bell, disturbing Lucas from a sleep, and is let in and sits on the couch where Lucas can offer her a drink while he retrieves her two boxes, identified by her initials. After this, Tiffany notes on how stressed Lucas looks and he can answer positively or negatively, choosing either way to conceal the truth of the murder and hallucinations. Lucas will then have the option to kiss Tiffany and have her refuse and leave, to be asked to leave, or to answer sentimentally and if she's still single. The two latter options will prompt Tiffany to ask Lucas to play the guitar, and if done successfully, will again have the option to ask her to leave or to kiss. Kissing Tiffany will lead the two to sleep together. Tiffany will then appear in Lucas' bed when he dreams of Jade outside of the apartment and she'll ask if he's okay.

Tiffany is next seen after Lucas becomes a fugitive and breaks into her apartment. She is initially startled after arriving home and seeing him but hugs him and confesses her love. Tyler Miles shortly appears with another officer and knocks on the door, giving Lucas a limited time to hide before Tiffany answers it. She'll lie and say she hasn't seen Lucas since she picked up her stuff at his apartment. Tyler will then search the apartment before leaving and give her a card if Lucas contacts her, warning Tiffany that he's a dangerous man.

Tiffany is later kidnapped and held hostage by the Oracle of the Orange Clan, tied to a post at the top of a roller coaster at The Fun Fair. Lucas comes to the rescue and frees her bound hands, but before they could escape, the Oracle causes the wooden floor beneath them to collapse and causes the two to fall to their death. Tiffany's last scene is of her image on the tombstone in the cemetery. 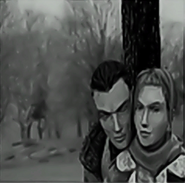 Photo of Lucas and Tiffany. Lucas's appearance is from his beta version 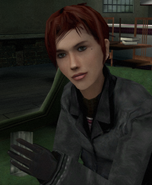 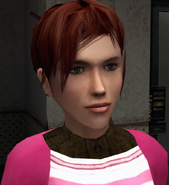 Tiffany in her apartment

Tiffany in her apartment

Tiffany kept hostage by the Oracle

Tiffany's tombstone
Add a photo to this gallery
Retrieved from "https://fahrenheit.fandom.com/wiki/Tiffany_Harper?oldid=5938"
Community content is available under CC-BY-SA unless otherwise noted.